my make-up collection (and obsession) grew significantly in 2011. beginning last christmas when i got my sigma brush roll set to cheer me up after a horrible semester and my sephora train case from my boyfriend, i was on my way to growing my collection. during the summer, i also got the ikea malm dressing table to use as a vanity. because of school, i couldn’t do a lot of make-up gigs but the ones that i did do, i was happy with. in fact, last christmas eve, i did hair and make-up for almost 5-6 hours straight.

i wish i had more time to practice but i’ve gotten to know the structures of my face (it’s still growing, apparently) better than i have before so i thought i should post my top 3 make-up looks of 2011:

i wore this look for my friend’s graduation party. when dressing up, i’m known for wearing stronger looks with false eyelashes and lots of hair extensions. i was able to achieve this look without the use of either so i was quite proud. for the face, i used mac’s face and body foundation, some of their bronzey and gold shadows and their bronzer. i also used nars blush in orgasm. for my lashes, my favorite mascara is lancome’s waterproof hypnose. my favorite part about this look is the eyebrows. i do love a strong brow. 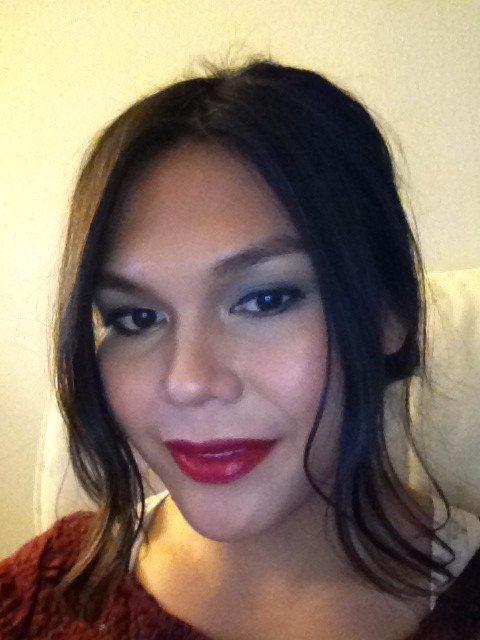 during the semester, i pretty much wore sweats or scrubs so when winter break hit, i was determined to get some mileage out of my collection. for an entire week, i was obsessed with doing a red lip and decided that to be the focus of my look for a christmas eve party. i used mac red on my lips with a nyx lipliner. i kept my eyes simple using neutral browns from my mac and inglot palettes and a black cream liner using mac’s fluidline. i tried to keep the cheeks as bare as i could so i used mac’s oh so fair blush from their venomous villains collection. i almost never put my hair up but decided to go for it and try this simple up-do i saw on pinterest. (i was in a hurry and couldn’t perfect it so it didn’t last the entire evening but i did get a compliment from the lady at spec’s)

for the last make-up look of the year, i decided that i wanted to look like my make-up collection threw up in my face (yeah, i said it) so this look was inspired by pixiwoo’s holiday tutorial but kicked up a notch. i used an inglot green as the base shadow but added an inglot navy blue for my crease. like the tutorial, i used mac’s relfects transparent teal that i got in a sample from make-up geek on the eyes. i used an urban decay 24/7 liner in stash to line the eyes. i contoured the heck out of my face like i was getting ready to lip-sync for my motherf*&#$^g life using a bourjois bronzer that i got from ASOS (i’m pretty bummed that sephora stopped carrying bourjois). for the lips, i used mac’s viva glam II. oh and the hair–it’s a wig. i love it! (oh yeah, pixiwoo and manila luzon gave me a compliment on this look on twitter so i was pretty excited about that)